Scharnstein – gateway to the inner Almtal.

The mountains here are gentle and inviting. The paths along the river Alm are ideal
for walking, light hiking and Nordic walking. Scharnstein is a
place of history and tradition: for example the scythe museum Geyerhammer with its origin going back to the biggest synth work during the Austro-Hungarian A different kind of history can be experienced at the Austrian Crime Museum at the castle of Scharnstein.
A hiking tour will lead you up to the ruins of the castle, where you will be rewarded with a spectacular view over the valley. From the historical village square in Viechtwang one can explore the hills Hacklberg and Bäckerberg with lots of opportunities to stop for a meal in one of Scharnstein’s restaurants. Also equestrian fans will be impressed about the widespread opportunities that Scharnstein has to offer. Viechtwang (a part of Scharnstein) is well-known even beyond Austria, due to the many equestrian tournaments and competitions, making horse lovers’ hearts beat faster.
Even glider pilots come to the airfield in Scharnstein as well as enthusiastic campers who can pitch their tents and park their campers at the campground next to the Alm River. 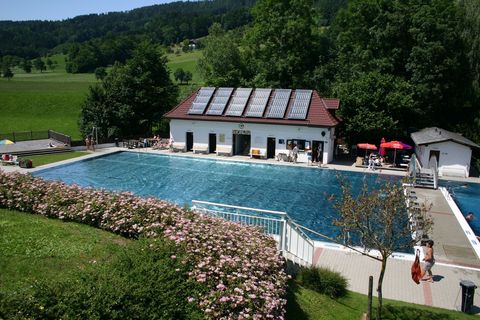